The Farmer’s Insurance Open starts tomorrow. This tournament will have a very strong field and if you look close, some players are generating more attention than normal. Personally, I do not have a favorite for this weekend’s event, however I am intrigued by all the discussion and questions asked by the media. 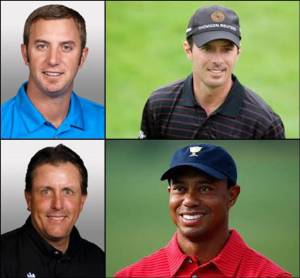 Of all the players this weekend, there are four players who have caught my attention without being in contention. I bet you can guess who they are; just in case you cannot here they are: Tiger Woods, Phil Mickelson, Dustin Johnson, and Mike Weir. These players in the spotlight and it will be interesting to see how they play at Torrey Pines in San Diego.

Tiger Woods and Phil Mickelson are in the hot seat because of their poor play. It is difficult to comprehend that these two superstars are under performing for various reasons, but yet they are. Many pundits are posing the question of what his going on, but I suggest that nothing is happening. It is far to early in the season to count either of these players out of anything. After accomplishing just about everything a professional golfer can, I suggest that their motivation to play well does not come from the week to week grind of being on the tour. With only two months before the Masters, Tiger and Phil are carefully planning their strategy to peak at the first Major. Like it or not, I believe that their overall plan for the season is to play less, compete at the important tournaments and win Majors!

Dustin Johnson is returning after a self-imposed break from professional golf. During that time, he suggests he fixed challenges in his personal life, become a father, and a is better person. There are many articles speculating about why he left golf, but in the big scheme of things only he knows the real reasons. I am not sure how Dustin Johnson will be received by the golfing fans, but he is back and I wish him the best of luck on his personal journey.

Mike Weir is not playing very well this year. He has missed the cut at 4 out of 5 tournaments this year. He has struggled for some time due to injuries and well, just poor play. The reason I grouped Weir in the others is just to wish him well. I have followed Weir for years and thought I would send him positive thoughts during this weekends tournament. Good luck Mike; hit them long, chip them close and putt them true!

The Farmer’s Insurance Open is a fresh opportunity for Tiger, Phil, Dustin, and Mike to prove all the nay -sayers wrong. This week is a fresh canvas for these famous artists to create a masterpiece. I will be watching the action closely and wishing these four players well!