Payne Stewart was a great golfer. He offered many nuggets of wisdom, but this one hits home with me the most: 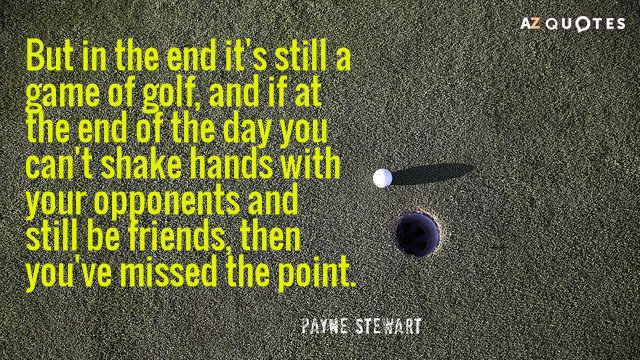 I can honestly say I have never walked off the course made at my opponent. It is frustrating sometimes to play with a turtle, but leaving the course mad has never part of any scenario. I guess, if I got to the point where I was angry, I need to look at the entire situation because golf would stop to be fun at that point.

I have never had an opponent walk off mad either. Again, they were disappointed at their play, but not angry at me. The closest I came to a situation of anger involved me, but it was not directed at me.

Many years ago at the Circle Pines Golf Course in Borden, I went out as a single at just before the first tee off at 7 am. The course was empty and the proshop told me to be on my way. Well, it was a great round. I looped around quickly until I met a twosome on the 14th hole. They were on the green and I was 100 yards out patiently waiting for my turn to play.

I thought that maybe on the 15th tee they would let me through, but alas, they did not. So, I slowly followed them up the 15th fairway. With the same scenario as the previous hole, I wait at 100 yards to the two gentlemen to finish. With only 3 holes to go, I figured I would be following them for the rest of the way. Suddenly, one of the players was walking back towards me with is clubs.

I watched the gentlemen make his way back to my position. When he was within a few yards he asked if he could join me. I was a bit befuddled, but of course I said yes. After I hit my ball on the green, we introduced ourselves and I gave him a quizzical look and he explained that his other playing partner would not let me go through. He was always the first guy out the course in the morning and thought he should be the first guy to finish. I would just have to wait.

Well, this did not sit well with the gentlemen who joined me. He said the argued about not letting me through for the entire 15th hole and finally, my guy said screw this and left to join me. He said that it was not right and the other guy was being hard-headed for no reason. He was quite upset, but seemed to calm down as we made our way through the last 3 holes. I thanked my new playing partner for being considerate and then wondered if I would do the same thing? Would you?

4 thoughts on “Golf is a Friendly Game”