As I walk from my car to the clubhouse, the sense of disappointment starts to grow as I see a congregation of players waiting to hit the links. They mull around the coffee pot making small talk waiting for the course Super to give the green light. As the numbers builds, so does our anxiety. Suddenly, everyone becomes a mathematician using complex algorithms to figure out when they will tee off and when we will finish. And that is before we factor in the ability of the players in front of us! 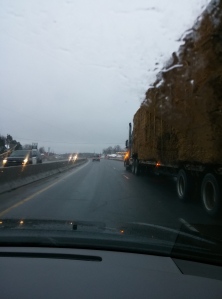 Pouring rain as you head to the golf course changes your mental preparation and expectations.

Frost or rain delays are a part of golf. Protecting the course is very important because unwanted foot traffic in delicate areas of the course could cause untold damage and longer delays in the future. Not to mention to the cost of repair that might be passed on to the members. Although superintendents have good like powers preventing players from teeing it up too early, their omnipresence cannot not prevent some clown from tearing up the course because they think it is funny! (Sorry bit of a rant there)

In 2015, I experienced two incidents where the rain had a critical influence on my golf game. The first was during qualifiers for the Military Base Team. The started before I teed off and did not stop until hours after I finished. On the 13th tee, we all felt that the powers to be should have called us of the course. Because, it was a tournament, we could not just walk off for fear of being disqualified. Anyway, we finished the round and the course was closed when walked off the 18th hole.

Walking into the scorers tent, we found out that they stopped players from teeing off about 1.5 hours ago, but were remiss to call us back. They wanted everyone to finish under the same conditions, but in our case the rain worsened as the day progressed. I am not questioning their decision, but I can tell you that mentally, we had a hard time staying focused during the last 4 holes. I finished with an 87, it was the fourth lowest score of the day; I considered this an awesome 87.

Torrent of rain will cause delays!

The next instance was at the Military Regional competition I qualified for with the round above. The first day of the event, it pour like crazy! The torrent of rain seemed to never stop. As we sat in the club house watching TV, we would receive updates as to when we could hit the links. Because it was a tournament, we had to sit around for hours waiting for the round to be cancelled. As it turned out, it was not cancelled and we started teeing off after a 5 hour delay. This round was mentally tough because sitting around waiting is never fun!

Ever had a train delay?

When we it the course, there was casual water every where, the bunkers were out of play because of the water, and the greens were very slow. Course management was critical because of the water collection areas and limited access to the greens. However, the delay was very important. The Superintendent added an extra hour of delay after it stopped raining to protect the course. Many of the players complained, but after talking to many a Super, I fully understand and support their position. And you should too!

On a side note, some of my rounds in the past were delayed because of frost, rain, snow, trains, hail, lightning, not enough daylight and illness of the course staff. During each delay, I was disappointed and started to worry about being able to get my round in; however, looking back, I worried for nothing. It was all part of playing golf way out of my control; so why worry!

When and what caused your last delay before hitting the links?

5 thoughts on “Frost or Rain Delays in Golf”

Join 4,549 other subscribers
Follow The Grateful Golfer on WordPress.com