How many times have we heard “Are My Clubs OK?”

While golfing with our friends, most of us are lax with the rules of etiquette.  Besides, it is more fun poking fun at our friends, telling jokes, and pretending that your friend does miss that four-foot gimmie (gimmie in their eyes, even though they have not made a four-footer all day).  However, during a competition, the way we play should be different and we should be more aware of the etiquette of golf because it is important.

On particular aspect of etiquette is club location while your opponent is playing. Equipment should be out of sight, not in the line of intended ball travel or close enough to cause a shadow over their ball.  Actually, these guidelines should apply to their clubs as well. 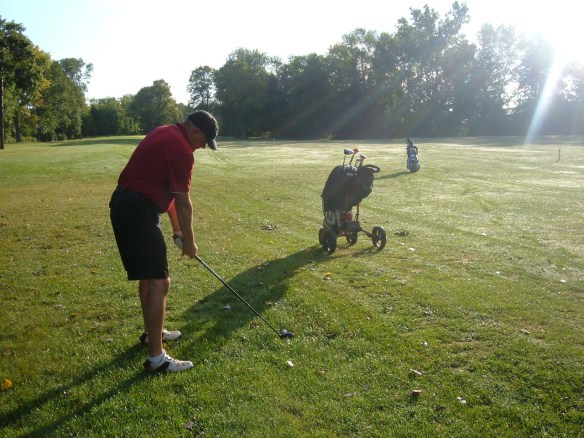 Whats Wrong With This Picture?

There are many reasons for this particular rule (although rule might be a bit strong).

Safety. Standing forward of someone hitting the ball is not too smart.  But, it happens all the time.  Usually, the other members are across the fairway and move to their ball for speed of play.  Sometimes, however, they get to close and that is when a the safety aspect kicks in.

Penalty Strokes.  Keeping your clubs behind you will prevent penalty strokes (one stroke  for hitting your own equipment, caddie or partner – rule 19).  Ever wonder why the pro caddies move so far from the player when they are hitting…..probably for this exact reason.

Etiquette.  Standing in someones golf space can cause problems.  Some players like opponents to stand-off to their right.  Others left. Some behind….but never in front of their field of view.  My general rule for this is at least 10 – 15 feet away from the player.

So placing your clubs close to someone playing is not a very good idea.  Placing your own clubs in the way is just a bad idea.  One last point, if you have to as “Are My Clubs OK?” They are not!

I am a grateful golfer!  See you on the links!

6 thoughts on “Are My Clubs In The Way?”