Warming Up in the Rain!

Our strategy for the 2-man scramble worked! Two posts ago, I put up a strategy on how to play the 2-man scramble at my home course Roundel Glen. It started out very wet with rain coming down like there was no tomorrow. Scheduled to tee off at 1030 am, our tee time was pushed until 1115 am to give the storm cell a chance to clear the area. As the rain started to wane, we teed off on the short par 3 first hole.

The weather was a factor for about 30 minutes. After the storm cell blew through, it was windy, but warm. After the third hole all the rain gear was put away. After the sixth hole all the outer clothing was stuffed back into our bags. And by the 10th hole we were looking for sunscreen. Overall, the weather was fantastic for this fun tournament. 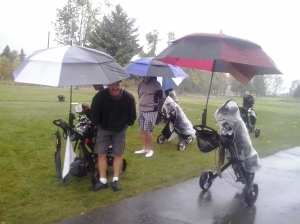 The First Tee – Playing in the Rain!

Our group had three teams because of the odd number players in the tournament. Each team I played with today was completely different. The first team was Dave and Dale. These two gentlemen are in their mid-sixties and were up for the challenge right from the start. Dale did not hit the ball farther than 150-yards and could not see distances very well. However, his drive was always in play on the fairway and he could putt like Jack Nicklaus! Dave hit the ball a long way, was very accurate with the second shot and was a chipping demon. They ended up shooting par with a net score of 69. It was very nice to watch.

The second group was Steve and Paul. These were younger guys in their late 30s. Both could hit the ball a long way, chip well and putt fairly decent. Unfortunately, both players were in sync today. When one hit their ball into the woods, so did the other. When one had a poor chip, usually the other player did as well. So, they had a tough round and did not score as well as Dave and Dale.

Number 9 Green. The Sun is Shining so Brightly!

Jean and I started strong. I hit the ball to six feet off the tee on the first hole. Our positive start quickly turned to disappointment quickly as Jean’s putt veered off to the right with about one inch to go. Under close inspection of the hole, the edges were pushed up and made it very difficult to sink any putt. Forgetting our bad luck, Jean and I focused on each shot at hand with very good success. When one person hit a poor shot, the other was there to pick up the pieces. Overall, we played very well and shot a net 66. Good enough for second place!

A couple of other highlights from our round are worth mentioning. On hole number 10, I made a mental error that I had never made before. There is a rule in match play that if you putt your ball out, that is the score that will count, regardless if the rest of your teammates have putted or not. Makes perfect sense to me. However, in other scramble tournaments to speed up play, if a player putts his ball and leaves it within a couple of inches, that player would normally walk up and tap their ball in the hole. The next player would putt from the original spot and if they sink their putt, that is the score that would count. Well, I was the first to putt a 12 foot putt. I left the ball two inches from the hole, so I walked up to my ball and tapped it in for a bogey. Then the light went on about my mental error! Our playing partners said not to worry about it, but fair is fair and Jean did not take his putt. This cost a stroke because I was not paying attention…did I mention we came second, losing by only one stroke! 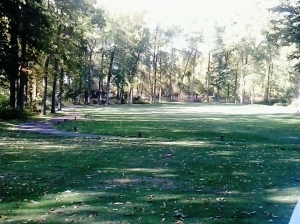 The second highlight was on the 18th hole. It is a long par 5 and the wind was blowing stiffly from right to left. Jean hit a monster of a drive to about 215 yards from the green. He confidently pulled out his 3-wood and hit his ball 35 feet from the pin on the right. His second shot was perfectly played considering his ball fought the wind the entire way.  He was first to putt and lipped out for his natural eagle! After watching his putt, I aimed a bit more to the right and stroked a solid putt. To our amazement, it hit the back of the hole and dropped in for eagle! This shot capped off a very strong finish of birdie, birdie, eagle! To make it more exciting, we cut someone off for a skin!

At the end of the day we had 1 eagle, six birdies, 8 pars and 3 bogies. It was a pretty solid round for a 2-man scramble. The important part is we followed our strategy most of the time. We mixed up who teed off first, chipped first and putted first to match our strengths. This worked very well. But more importantly, we focused on having fun and enjoying a great round of golf with our four new friends.

Leave a Reply to Golf is Mental Cancel reply